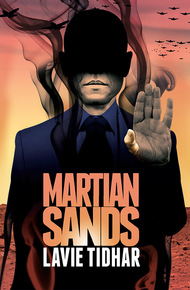 Lavie Tidhar is author of Osama, The Violent Century, A Man Lies Dreaming, Central Station, Unholy Land, By Force Alone, The Hood and The Escapement. His latest novels are Maror and Neom. His work encompasses children's books (The Candy Mafia), comics (Adler), anthologies (The Best of World SF) and numerous short stories. His awards include the World Fantasy Award, the British Fantasy Award, the John W. Campbell Award, the Neukom Prize and the Jerwood Fiction Uncovered Prize, and he has been shortlisted for the Clarke Award and the Philip K. Dick Award amongst many others.

1941: an hour before the attack on Pearl Harbour, a man from the future materialises in President Roosevelt's office. His offer of military aid may cut the War and its pending atrocities short, and alter the course of the future...

The future: welcome to Mars, where the lives of three ordinary people become entwined in one dingy smokesbar the moment an assassin opens fire. The target: the mysterious Bill Glimmung. But is Glimmung even real? The truth might just be found in the remote FDR Mountains, an empty place, apparently of no significance, but where digital intelligences may be about to bring to fruition a long-held dream of the stars...

Mixing mystery and science fiction, the Holocaust and the Mars of both Edgar Rice Burroughs and Philip K. Dick, Martian Sands is a story of both the past and future, of hope, and love, and of finding meaning—no matter where—or when—you are.

I couldn't resist putting one of mine in here, but I hope it's suitably dark, at least – if strangely hopeful. It's an early one, and if you happened to like Central Station this one's set somewhat in the same universe... – Lavie Tidhar

The man was of medium build, with short brown hair and soft brown eyes, a good ssuit and an open, almost earnest expression. The thumb on his left hand was a golden prosthetic. He said, 'My name's Glimmung. Bill Glimmung. But you can call me Bill.'

The President looked at him without expression, then reached for a cigarette and lit it. On the desk before him an ashtray was overflowing with cigarette stubs. In front of the President were papers, the most recent of them stamped with yesterday's date: the sixth of December, nineteen forty-one. 'How did you get in here, Bill?'

The man—this Bill Glimmung—nodded as if approving of the President's question. He pointed. 'Through that door.'

'That door wasn't there a moment ago,' the President said.

'It's from the future,' Bill Glimmung said. 'And, naturally, so am I.'

The President was tired. He had been chain-smoking, poring over military intelligence briefs coming in from Europe and the Pacific. He was worried about the Nazi expansion, about possible Japanese involvement in the war, about convincing his own people that they should become involved. 'It's good to know there will be a future,' the President said dryly, and Bill Glimmung laughed. 'Possibly a very good future,' he said, 'if you take me up on my offer.'

'Tell me about it,' Franklin Delano Roosevelt said, and gestured with the hand holding the cigarette. A little ash fell, scattering over the papers. The President brushed it away.

'There isn't–' the President said, then stopped. Glimmung nodded. 'That's right,' he said. 'It doesn't exist yet. It will be established in nineteen forty-eight—three years after the end of the war, incidentally—and only after more than six million Jews die under the Germans in specially-constructed death camps.'

His tone was mild, matter of fact. 'Six million Jews—men, women, children—packed like cattle into trains and sent to the Vernichtungslagers. The Extermination Camps. There to be killed by Zyklon-B gas, and their bodies burned in crematoriums. Six million, Mr. President. The greatest coordinated, scientific, mass extermination of people the world has ever seen. My people—my government—would very much like to see that changed.'

The President nodded, once. He reached for a cigarette, then realised he already had one lit. He raised his head and looked at the stranger. 'What is your proposition?' he said. Whether he was reeling inside, whether he believed Bill Glimmung, it did not show on his face. His tone was practical, emotionless—matching Glimmung's.

'You know,' Bill Glimmung said, 'you Americans are a strange breed. Take today, for instance. Today, Mr. President, is a bad day for you. Don't worry,' he said, waving his hand, 'I'll show it to you soon. It's not yet time.'

'Time for what?' the President said, but Bill Glimmung seemed not to hear.

'You know what you're going to call today, this date?' he said. 'A date which will live in infamy forever. Whereas, in fact, it's tomorrow that should be called that. Do you know why?'

The President stared at him. He stubbed out his cigarette, a little forcefully. He didn't answer.

'I know,' the President said. They stared at each other. Bill Glimmung turned away first. 'December eighth, nineteen forty-one,' he said quietly, almost as if speaking to himself. 'Chelmno. To be followed soon after by Majdanek, Sobibor, Treblinka, Belzec and, of course, Auschwitz. Many members of my family died in Auschwitz, Mr. President.'

'I'm sorry to hear that,' the President said. Bill Glimmung turned to him, a thin smile on his face. 'Don't be sorry, Mr. President,' he said. 'You can help change that.'

'What happens today?' the President said.

Again, Bill Glimmung seemed not to hear. 'A date which would live in infamy, forever,' he said. 'And you could change that. Once you join the war–'

'I have been doing everything in my power to fight the Nazis,' the President said, interrupting him. 'Short of joining the war. But I can't go to war without the consent of my people.'

'Oh, I wouldn't worry about that,' Bill Glimmung said. His thumb, that strange, gold prosthetic, flashed as his hand moved. 'Today is the day America gets dragged, kicking and screaming, into this world war. It's why we picked today to contact you. We want to help you. We don't just want you to win—which you would do regardless—but we want you to win quickly. And, of course, we want you to stop the slaughter of the Jews. Which is why you will be bombing Chelmno tomorrow.'

'Okay,' the President said. He reached for, and lit, another cigarette. Bill Glimmung's face bore a disapproving look, and the President allowed the smoke coming out of his nostrils to waft toward the other man. 'I take it you don't smoke, in the future?'

'Okay,' the President said again. And, 'What is your proposition?'

'Military aid,' Bill Glimmung said. 'We will provide you with late twentieth-century equipment, as per the following–' and he took out a piece of paper from his suit's breast pocket and put it down before the President.

'Small arms: Uzi, Negev and Dror machine-guns; Desert Eagle and Barak handguns; Galil, Tavor and Magal assault rifles. Also some sniper rifles. Also ammo. We can only provide a small amount of these, to be used exclusively in the European campaign, specifically for the liberation of the Jewish ghettos and camps. We expect you will train a special commando unit for this purpose. We will provide instructors.'

The paper, the President saw, was very strange. There were images on it, showing him the weapons as Bill Glimmung listed them, lines and lines of technical specifications running underneath, and the images kept changing, the text with them, as if the paper was a sort of screen, and somewhere there was an unseen projector.

'We can also provide you with a limited number of Merkava tanks—fifty kilometres per hour; a hundred and five millimeter cannon, mortar, and three machine guns, per unit—also to be used in the European campaign. Basically, what you do in the Pacific is your prerogative. Our interest lies with the Germans.'

'Thank you. We will also provide you with several Kfir all-weather, multi-role combat aircraft, jet-powered, seven hundred and seventy kilometres range, max speed of over two thousand kilometres per hour, and a battery of Jericho I ballistic missiles, with a five hundred kilometres range.'

On the sheet of paper, images flickered and changed. The President watched arrays of gleaming weapons being fired, a variety of targets being demolished.

'And in exchange?' the President said.

'You will make the liberation of the Jews of Europe your foremost priority. You will also… encourage the British to make available to the Jews a suitable land for settlement.'

'I…see,' the President said. He tapped ash carefully and said, 'Naturally, I will need to consult with my–'

'No,' Bill Glimmung said. 'Believe me, you won't. Not after today. And, naturally, Mr. President-' and he smiled that thin, slightly mocking smile again '-this will need to remain a secret, known only by the few. Geheimnis, if you like.' And he laughed, as if at a private joke.

The President blew out smoke in silence, and watched him.

'Let me show you something,' Bill Glimmung said. He took a second, small rectangular piece of paper from his breast pocket and proceeded to unfold it, until it was the size of a sheet. He went to the Oval Office's wall and hung the sheet on it. It stuck to the wall easily. Bill Glimmung pressed his gold thumb onto the thin material, and images flickered into life.

At first, there was not much to see. A dark sky, and clouds. Then…

'These are Japanese bombers,' Bill Glimmung said. The images shifted and changed, showed ocean, then land. 'You recognise the harbour?'

The President stared at the screen. 'Pearl Harbor?' he said.

The President swore and reached for his phone.

'Don't,' Bill Glimmung said. He shrugged. 'It's too late for you to do anything, now. This will be over in ninety minutes.'

'Six million,' Bill Glimmung said, so softly the President had to strain to hear him. 'This war is happening now, Mr. President! And your country remains content, remains on the sidelines, unwilling to become involved. Tomorrow, the first death camp opens. After today, you will finally be part of this war. I am offering to help you end this quickly. No massive loss of American soldiers' lives, no dead Jews in the Vernichtungslagers. Make your choice, and do it quickly. I—we—will not make this offer twice.'

'You don't. All you have to do is think what would happen if we negotiated with the Japanese instead. We're reasonably sure that, with our aid, they'd be able to take on the Germans. Of course, when we show them what you do to them at the end of the war…'

The President stared at the wall, where Pearl Harbor was burning. 'Very well,' he said. 'We will accept your aid, and your terms. The liberation and resettlement of the Jews. Is that it?'

'Hmmm?' Bill Glimmung turned away from the images on the screen. That thin smile had left his face and he said, almost apologetically it seemed to the President, 'There is one other thing–'