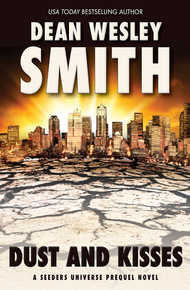 Considered one of the most prolific writers working in modern fiction, USA Today bestselling writer Dean Wesley Smith published far more than a hundred novels in forty years, and hundreds of short stories across many genres.

At the moment he produces novels in four major series, including the time travel Thunder Mountain novels set in the Old West, the galaxy-spanning Seeders Universe series, the urban fantasy Ghost of a Chance series, and a superhero series starring Poker Boy.

His monthly magazine, Smith's Monthly, which consists of only his own fiction, premiered in October 2013 and offers readers more than 70,000 words per issue, including a new and original novel every month.

During his career, Dean also wrote a couple dozen Star Trek novels, the only two original Men in Black novels, Spider-Man and X-Men novels, plus novels set in gaming and television worlds. Writing with his wife Kristine Kathryn Rusch under the name Kathryn Wesley, he wrote the novel for the NBC miniseries The Tenth Kingdom and other books for Hallmark Hall of Fame movies.

He wrote novels under dozens of pen names in the worlds of comic books and movies, including novelizations of almost a dozen films, from The Final Fantasy to Steel to Rundown.

Dean also worked as a fiction editor off and on, starting at Pulphouse Publishing, then at VB Tech Journal, then Pocket Books, and now at WMG Publishing, where he and Kristine Kathryn Rusch serve as series editors for the acclaimed Fiction River anthology series.

For more information about Dean's books and ongoing projects, please visit his website at www.deanwesleysmith.com.

When Carey Noack returns to the ruined Portland, Oregon, hoping to meet other survivors after three years of living alone, she doesn't expect the man of her dreams.

At first, Matt Ladel, the only person living in the old city, thinks he imagined the beautiful woman weaving through dead cars. Then he finds the reality behind the fantasy.

Suddenly, the two experts in survival and living alone must learn to work together, and trust again, in the face of an even greater danger.

A novel of hope and a new future, Dust and Kisses is the prequel novel to Dean Wesley Smith's popular Seeders Universe series.

IF SHE HAD THOUGHT ABOUT IT, Carey Noack would have figured that the world would end in a big build-up, with lots of panic and time to say good-bye to loved-ones in tragic scenes of crying and hugging like it always was in the movies. But she had never thought about it. None of her friends read science fiction, and the closest thing she had come to an end of the world thought was worrying about how the Greenland ice cap might melt.

So Wednesday morning, when the world did end, she wasn't expecting it. No one was, actually. But she did remember the exact moment it happened, right down to the second because her job that morning was to stare at scientific measuring instruments and a clock while taking notes about the readings every fifteen seconds.

At 23, she had gotten lucky in life, and she figured in love as well. A post-doc in astrophysics from the University of Oregon, she had landed a plum job working in Portland, Oregon for the famous Dr. Canfield, a man she both admired and hated, often in the same breath when talking to her friends and family. She stood at five-foot-two, a good sixteen inches shorter than Canfield who looked like a cross between a bad Dicken's character and a stretched Santa Claus because of his white beard. She had long, brown hair and brown eyes that everyone said were "fiery" whatever that meant.

Canfield had gotten the habit of patting her on the head like a child every time he was pleased with her, and if she didn't need the job working with him so much for her career, she would have just broken his hand in about a dozen places. If he caught her on the wrong day, she still might. Screw the career.

Her fiancée, Paine Kennedy, worked as an assistant coach at the University, and even though with her working for Canfield in Portland, the two-hour drive down I-5 between the cities didn't stop them from having a wonderful relationship, one they both planned on turning into a marriage next year. This morning, she had kissed him good-bye at seven while he tried to grope her to get her to come back to bed. As much as she wanted to rejoin the man of her dreams in that bed, she didn't dare be late for work. So she had left him to go back to sleep with a promise she would see him at lunch.

Lunch didn't happen. At 10:18 and seven seconds on Wednesday morning, the world ended.

At 10:18, she was sitting in a protected steel vault watching the "control" readings for an experiment Canfield was doing in another room. Canfield's hope was to get some variance between two readings, hers in a protected control vault and his in the open.

At 10:22, as planned, she logged in her last readings and the exact time and opened the vault door.

Dr. Canfield lay sprawled on the floor of the lab, his eyes rolled up into his head.

For an instant, the sight shocked her. Then she quickly moved, grabbing the phone on the desk above Canfield and jabbing in 911.

While it rang, she tucked the phone under her chin and knelt beside him, feeling for a pulse.

Nothing that she could find.

She quickly flipped him onto his back and went through the quick procedures she had learned in her first aid class three years before. With the phone still ringing in her ear, she started pumping on his chest.

She kept at it, working to keep her pace steady, her pressure solid on his chest, but not too hard.

After about a minute, she knew she couldn't wait any longer. She needed help, and no one was coming into the lab to give her help. She needed to go find help if Canfield had a chance of pulling through this.

Leaving the phone connected to 911 and ringing, she checked for a pulse on Canfield, then ran for the door, heading down the lab hallway and out onto the street to get help from someone.

She burst through the exterior door and took two staggering steps before stopping on the hot sidewalk between two tall buildings.

The sound hit her first.

At least a hundred car alarms in the surrounding blocks of the city were going off at once.

She looked around, trying to grasp what she was seeing. The morning promised a hot day ahead. Two blocks down the hill was the Willamette River, two blocks to her left was Burnside, a major arterial through the city. The buildings around here were ten to thirty stories tall. Canfield's lab was on the main floor, tucked to the back of the building.

An intersection with a streetlight was to her right about fifty paces, and parked cars lined the street.

Everything was so familiar. She had seen it all every day for months.

Then her mind suddenly let her see what was wrong.

Bodies lay crumpled in piles along the sidewalk going in both directions from her. Cars had crashed into other cars, their drivers slumped against their seat belts, heads rolled to one side or the other.

She ran to the nearest woman on the sidewalk and checked her.

She checked another woman.

She could see hundreds of bodies around her, all seemingly dead.

"Help, someone!" she shouted, but her voice was drowned by the massive wave of noise from the car alarms and running engines.

No one was alive to hear her.

Then the smiling image of her fiancée flashed into her mind and she screamed "Paine!"

He was fifteen blocks away.

She turned and headed for her apartment in the northwest section of town at a run, jumping over bodies, trying not to look at them, trying to ignore the dead staring at her from their still running cars.

The nightmare had begun. The world had ended.

She was still alive.

And very much alone.